Composing and Decomposing Numbers in Pre-K and Kindergarten 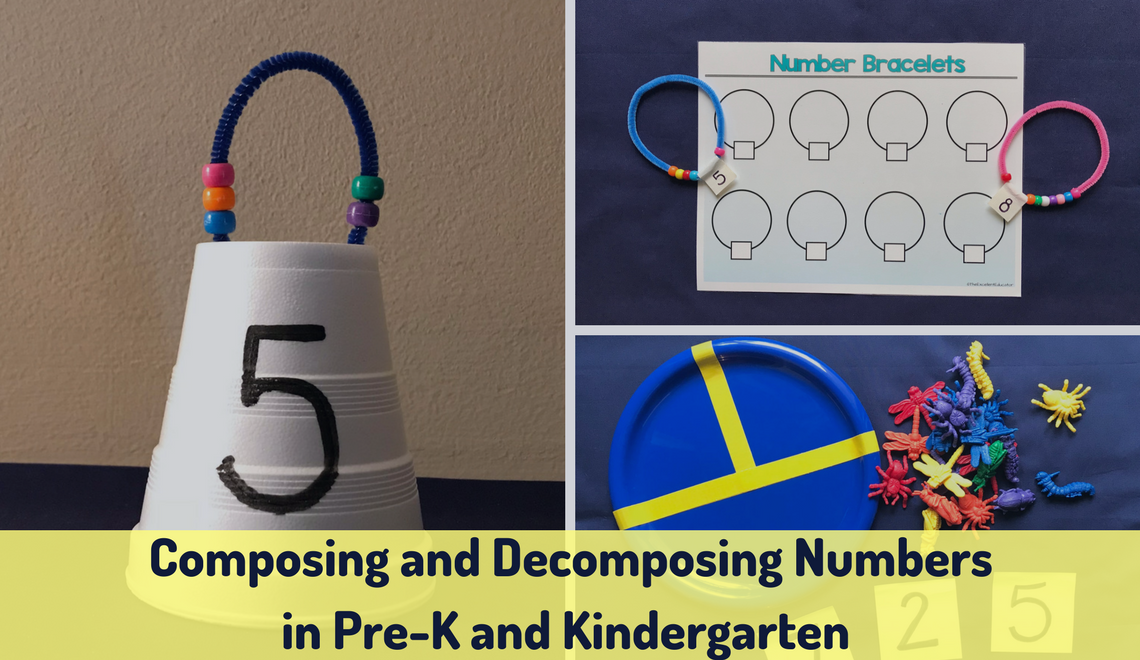 Composing and decomposing numbers is a mathematical skill that should be introduced in Pre-K and further elaborated on in Kindergarten. It involves helping children break numbers down into sub-parts. A child who can compose and decompose numbers understands that 2 and 3 together makes 5. They will also know that 5 can be broken down to a 1 and a 4. When children get comfortable with single digit numbers (0-9), they are ready to move on to double digit and eventually triple digit numbers – which is called unitizing!

The best way to introduce composing and decomposing numbers to young children is to start off with simple visuals they can manipulate. I have three simple ideas that you can try. Then the children need to split their manipulatives up in the smaller two sections to represent the number broken down into sub-parts. Repeat this process showing the different ways to create the number. Place a specific number of beads on the pipe cleaner and connect the ends by twisting them to make a bracelet in the shape of a circle. Once the ends are twisted together, place a piece of tape around the twisted part. Leave a little bit of the tape hanging down to write the number of beads placed the bracelet.

The bracelets allow children to see the entire quantity and the quantity broken down into two parts when the beads are separated in different ways.

There is also an extension to this activity for children to represent their thinking. This is an important skill that children benefit from and will use as they approach math in older grades. This first version is for Pre-K. Children will represent how numbers are broken down according to how their bracelet looks. This second version is for Kindergarten. Children will represent how numbers are broken down according to how their bracelet looks and they will also add the number sentence below it. With beads, pipe cleaner and styrofoam cups, you can easily create these visual to have children practice composing and decomposing numbers and quantities! Write a number on the front of the cup then count out the same number of beads that you wrote on the cup. Cut a pipe cleaner in half and poke holes in the top of the cup. And just like the your cup has been transformed into a great mathematical tool!

Each of these ideas give children a chance to see numbers as subparts and manipulate them!  Try one or try all three! 😉